It has become apparent that no amount of rational debate, fact
pulling or history dredging will sway the dyed in the wool
conservative voter. You may find yourself in a heated debate reciting
the same talking points, agreeing on fact, differing in perception.
What kind of war are we fighting? What are we up against? The answer
belongs in the realm of good versus evil, God versus Satan, right
versus wrong. We are reduced now to this simple equation. Let’s
proceed.

I speak from personal experiences, various and numerous. Over the
last 10 years I have managed to support myself, albeit marginally, by
shooting & selling aerial photographs. My largest support base
are dairy farmers in BC. At least half of them are christian
conservative. They have taught me a lot and I appreciate them for all
they have given me. Indeed, they have accepted me more than the
agnostic, avant-guard, liberal art world I grew up around ever did.

They have all that I lack, close family & friends, spiritual
community, earth & animal connection, land, holdings, homes, the
list goes on. Yet they see the light in me and I reflect back the
light in them. I am but a lone wolf in the desert compared to them.

God has a funny way of showing us our purpose. Mine now is to
reveal the insidious deception of perception that has invaded us from
the inside out. The greatest tools of control lie within the gut, not
the brain or the heart. Fear clenches our guts. Fear of losing
connections to generations of familial, spiritual and community
support and majority rule is behind the apparent disconnect of the
christian conservative voter.

I often enter deep conversations with my clients. They show grace
at all times despite my dark subject matters. Most of them know how
lucky they are and give thanks for the insulation farming has given
them from the twisted urban distopian dream that most of us chase
after.

They identify with Stephen Harper not because he is one of them –
he is not – but because he has targeted them for support and done a
good job of it. Many of them don’t know he is from Toronto, not
Calgary, or that he was a young liberal headed for ivy league elitism
when an inexplicable turn put him in the only real job he has ever
had, mail room clerk for Imperial Oil in Edmonton. The rest, as they
say, is history.

My mentally damaged sister is applying for mail room clerk jobs
right now. My brother can’t do that because he is dead. My mother
couldn’t work. She was too incapacitated from doctor prescribed
tranqs, anti depressants and later, anti psychotics. She never
recovered from the sleep therapy and trauma based mind control
programming she received, using shock treatments and other methods,
administered by Dr. Ewen Cameron and other doctors and nurses, some
of whom are now venerated, at Mcgill University, Royal Victoria
Hospital, Allen Memorial Institute in Montreal, Quebec, Canada, in
the mid fifties.

My father exhibited psychosis in his mid teens in Windsor,
Ontario. Someone led him to St. Peter’s seminary in London Ontario in
hopes of him “fitting in” as he often put it. This led to a
nervous breakdown and hospitalization at a psyche ward in either
London or Windsor, Ontario in the late ’40s or early 50’s. At some
point he went to the mental hospital in St. Thomas, Ontario as well.
Assumption College at the University of Western Ontario proved to be
his anchor. He graduated with honors in English and Philosophy in
1953. He completed his MA at the University of Toronto in 1960. He
went on to reach his only attainable career height, High School
English Teacher.

When he married my mother in 1959 he was at his first teaching job
at the College Militaire in St. Jean sur Richelieu, Quebec. My sister
and I were born there. My parents had a 3 month courtship. Their
marriage was horrible. They were at war with each other constantly.
He was abusive at all levels. 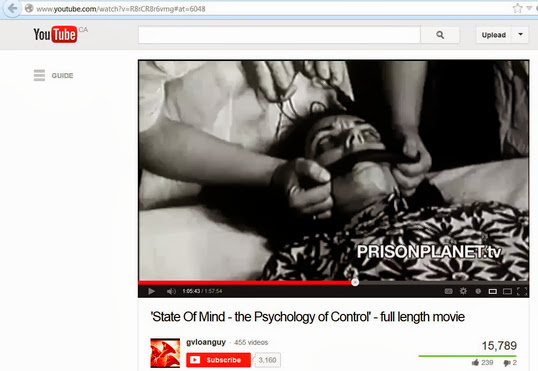 In July 2013 my mother showed up in an infowars produced movie,
called “State of Mind – the Psychology of Control”. There is a
video clip of her lying on an operating table fearfully looking
around for help as the electrodes descend on her forehead. No amount
of emails to the producers received a reply as to where this clip
came from. It was clearly got out of the US, not Canada. For those
not in the know, the CIA got wind of the barbaric practices of this
Health Canada funded hospital and swooped in with further funding and
collaboration. The project was MKULTRA. The movie has since been re
edited and my mothers clip cut out, but you can still find the
original version on line if you dig deep enough.

Just the other day, I found this picture on a random internet site
dubiously titled something like, ten fun facts about government mind
control… That is me. I don’t remember any of it, but I wasn’t
supposed to (read memory erased). The dots, however, have been
screaming for connection my whole life.

This, my friends, is what being old stock Canadian, really means;
Not good people of the earth standing up and being counted, but 8th
generation Canadian families used as guinea pigs since the take over.
Children of military, lost souls, street kids, wanna be
revolutionaries, orphans and natives make up just a fraction of the
survivors now coming forward, remembering. Some of us managed to
function, others not so much. In any case, the program is a failure.
You can not kill the human spirit.

You can count Stephen Harper and Justin Trudeau amoung these
survivors. Trudeau is so obvious, I wont even go into it. His
heritage speak volumes. I will expect his family to help him through
this, but Harper’s mask is mine to be revealed. I think he was in the
program with me. We are bonded on a spiritual level. I lucid dream
about him frequently. He considers me his ally, at least until I wake
up in the dream to confront him. Now he is just weary. He draws on my
good nature to console him as much as I train myself not to. And now,
at the final stages, after countless email entreaties, faxed
warnings, @pmharper tweets, it is war. Steve, wake the f&*k up.
You only stand to lose your soul.

Now, we are all survivors of the program. Since those early days
of Frankenstein experiments on my parents, myself and undoubtedly my
sister, the program has gone super nova. It has permeated every
aspect of society, both physically, through poisoned food and water
and etherically through EMF waves, TV, cell phones, electronic
weapons, HAARP, and god knows what else.

It is time to lift the veil, pull back the curtain, confront the
real enemy – some perverted pedophile Satan worshipers in England
who gave the Nazis all their great ideas. Canada is nothing but a
holding pen for energy sucking English elites who still control this
country down to the Westminster parliamentary system we have not
replaced since inception. That is why if your party is not for
proportional representation then they are either drinking the kool
aid or willingly deceivers.

Given all I have just revealed, I can’t be certain if I am feeding
the wolf or trapping it. Time will tell. You must use your own
discernment. You must find your own pathway to God.

However the process takes place, gradually through an NDP/
Liberal/ Green alliance or suddenly by a Green majority/ NDP
opposition. Whatever way, the cat is out of the bag, the elephant has
left the room, the emperor is wearing no clothes. This is it folks:
the grand deception the prophesies warned us about, whether you
believe it or not.

Myself, I am tired of being marginalized and would like some of
the baksheesh all these politicos enjoy, never got by me or my family
for our troubles. We were poor and I have struggled my whole life.
Nonetheless, I am proud of who I am and I am proud of my country. Our
country.

It is ours for the taking. Other countries are taking back their
sovereignty from the banksters, from corporatocracy, from the
Nazionists. For once in our time, can Canada do something that
matters on the world stage? Can we recognize ourselves as united and
humanitarian? Can we be strong, free and most of all brave? If I can
stand up and let all this shit drip off, then so can the farmers (my
long dead grandparents) and everyone else. God bless us all on
October 19th, 2015.

Any information regarding this subject matter, both personal to me
and to the unveiling of the program in general is greatly encouraged.
Please contact me at ellenatkin@gmail.com
or call 604 259 9508. In addition, donations are gratefully accepted
to further the research and study on this subject matter. The future
of the western world depends not on your silence, but on coming
forth.

1 thought on “The Final Showdown: Unveiling the Program”

Stealth camping in plain site on hilltop in medicine hat.
View on Twitter
0
3

As heartening as this tweet appears, there is no such discernment in the populace. Maybe 10 %. When shtf expect nazis to rise. Family friends will show their allegiance to the Reich. Not you. https://t.co/KLJ6IXIXFN
View on Twitter
0
4