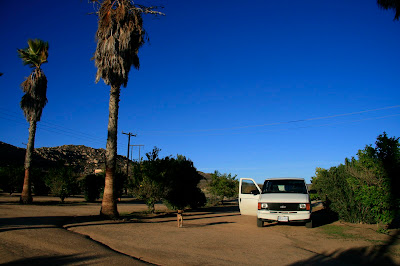 My first stop in Mexico: Rancho Sordo Mudo
I can’t believe how well I have sorted everything out. I am perfectly content in my van at 5:41 pm on Dec. 9, 2008. It is of course, dark out. Lately, it has been early to bed and early to rise. I got up at 4 30 am today to leave off the slabs and head into mexico. NO problemos when you hit the sack at 8 pm

I had a beautiful sunrise soak in the hottubs before I left. Crossing into Mexicali was a breeze. I was pulled over, but only to have a look inside the van. I opened the side door and he quickly surmised my benign traveler status and sent me only way, with a thank you lady. I made sure to wear some nice clothes and shoes.

I have been debating to get a little stove top for the propane bottle but nixed the idea when I discovered that my lantern also doubles as a heater. I do like the idea of tea, but I don’t really need any extra stuff right now, until I remodel on the way back to Canada.

I have the engine running right now so the battery on the comp doesn’t wear down. I am staying at Rancho Sordo Mudo, a little ways out of Ensenada on Highway 3. I am the only one in the campground. It is a baptist school for deaf children run by english speaking hosts (missionaries?). I quickly set up the table and gave the sprouts a goood spray and cut up a quarter cucumber, through in my first handful my own sprouts with an avocado, mixed it up with a little plum wine vinegar (thanks John at Angels for turning me on to that seasoning) and ate it with a can of black olives and a little vegetarian refried bean and some crackers and a glass of red wine.

Let me be the first to declare that the RAW FOOD MOVEMENT is officially over. Like vegetarianism, then veganism, now raw, the apex has been reached and it is all down hill from here. Sensible heads have prevailed. There is absolutely no concrete proof that 100% raw is 100 times more beneficial than being 95% raw as some leaders have had you believe. Angels health food institute has changed their description to read “a high enzymatic diet”. Dorit of Serentiy Spaces has changed the name of her film festival from “the Raw lifestyles Film Festival to “Green lifestyles Film Festival” and recentlyu interviewed by Kevin Gianni, doctors Jameth Sheridan and his brother have both gone on record to declare their reversal from 100% raw vegan to somewhat less than 100% raw vegan.

Let the “RAW” gurus and hucksters play their cards till the register dies. They can have their fanatical, hysterical, neurotic, misleading, cultish, peddle pushing, nonsense as it gets flushed down the toilet with the rest of their crap.

I remember when I opened Green Smoothie Land in Vancouver when I first went raw. I was going to call it RAW Revolution (good gaud how many of those have we heard) but was told by my friend that her phycic had said that the word RAW is, in itself, a negative word. So I changed it to Green smoothie land, which everyone liked. I won’t change the name of this blog for now but you never know.

Hear ye all you 100% raw people (we all know it is impossible anyway, even if you aren’t spotted buying ice cream at the local supermarket). Move away from the model or you risk losing your reputation as the association gets lobbed in with discrediting nutbags. 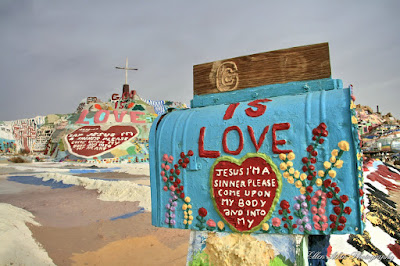 Another facinating part of the slabs is salvation mountain. See the pictures to get an idea. It is the first landmark other than the grafittied guards shacks upon entering the slabs. A coloured wash of biblical epitaphs rise up from the desert monotone. God is Love. The Holy Bible. Love is Universal. Leonard Knight was given a directive form God over 20 years a go to build Savation Mountain at the slabs. I met him several mornings at the hottub. He said after I introduced myself that, “all my life I couldn’t please anybody, and now everybody loves what I have done.” 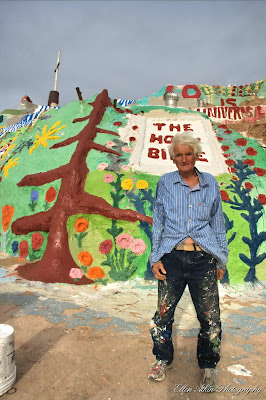 This is Leonard Knight.

Everyday, every hour cars, tour busses, a wedding party from LA arrived there during the week I was there. I finally hadmy own tour form loeonard and got these amazing portraits of the man himself. I asked him if many religious people came by and he said, “No”. Even though I saw a lisence plate that read, “Churchy” on the lot. His emphasis is on a simple message that God is love, God loves everybody regardles of faith. I don’t think he discusses religion at all. He just sticks to his message and emphasizes the simplicity of it. I felt very privelegded to meet him. I definitly had a strong feeling of deja vu when I entered the slabs and saw the mountain. I had been there before. Must have been in spirit. 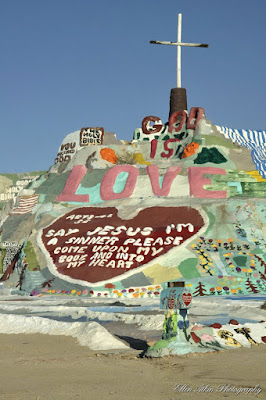 I am really happy. Simple and not so simple. But it is when you finally get there. I still am propelled to buy while I still can and think I might need this or that. I am pretty happy with all my purchases and don’t regret anything yet. And havn’t forgot anything yet either. I just went outside and it is full on blustery under a near full moon. Beautiful alone in this deserted trailer park in northern baja. I am taken back to a story of Bill whom I met in 07 in northern mazatlan, who said his family used to vacation in mex and just camp on the beach and there was no electricity anywhere in the 50’s. I can still feel that here. I can’t believe it is 830. I love being on the road. I love mexico. As soon as I crossed, I could feel it. It is warm and enveloping. The people here have real peace. The mexicans in the states are positively forboding, but here they are sweet and effervescent. Really, I had a bad feeling in california. As great as the slabs were, there was a terrible forbodance an edge and end of days kinda feel. Every town core from medford to calexico was mostly abandoned to the overplanned strip malls and supecentre style shopping. I liked arizona better than california. Something is wrong with california. Clearly it is cursed. But mexico is great. I am looking forward to my new life here. Looking forward to the families and children that I will meet. The landscape is so much more natural as well, even being further south. Although it is blowing like a wind tunnel out, it is still not too cold.

2 thoughts on “Salavation Mountain; Raw is Dead; I love Mexico” 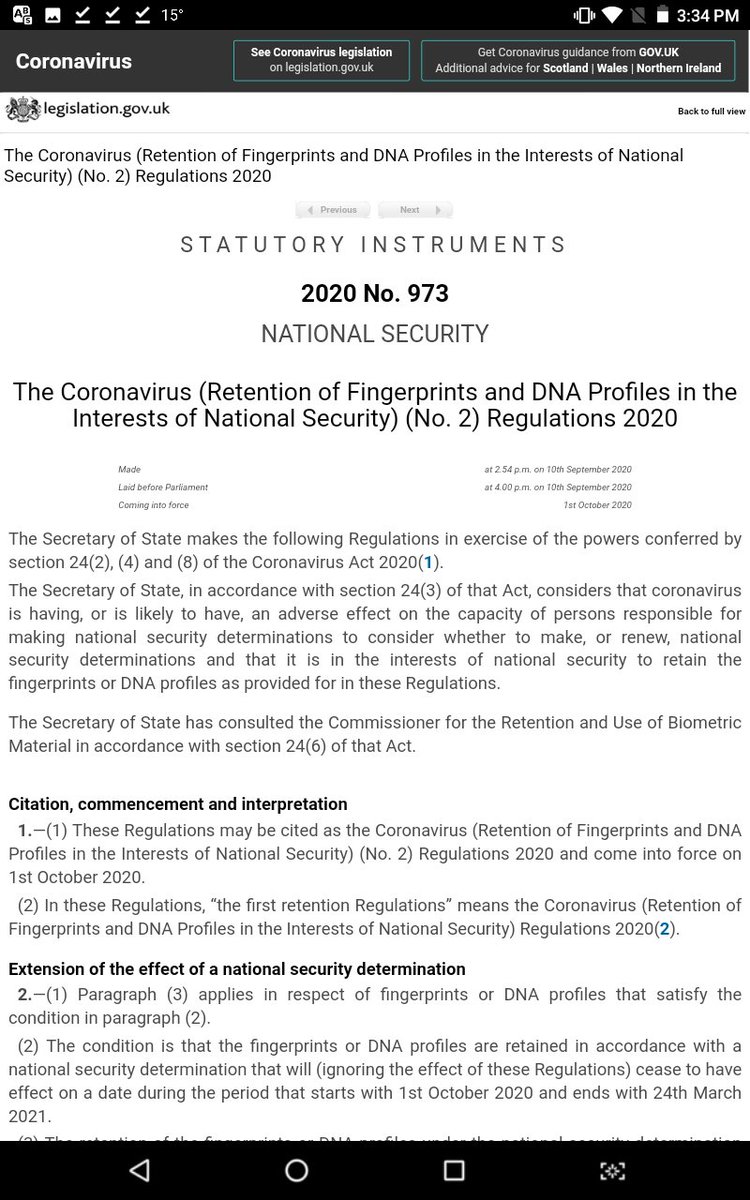