Right after that I had a bad
experience with a dentist in Mexico, Dr. Lorenia Estrada Tamalantes, and ended
up losing a molar to a botched root canal job. Right after that, my van broke
down and a yearlong nightmare began after I let the brothers to the mother and
father of my Mexican landlord family work on it.  2 months of misdiagnoses and faulty repairs ended
in an ugly showdown between me and a drunken, licentious, incompetent bully, Filipe
Leon.    A few
other people got involved, including legals, but I ended up getting sold out by
this privileged, self-appointed, do gooder neighbour who mediated a slam dunk
in the other guy’s court.

Despite this inglorious farewell, I returned at the end of
2012, after a fairly successful summer shooting and selling aerials in British
Columbia. Although, I took half the summer off and did some kind of lazy work/
living/ trade arrangement for this semi-retired photography enthusiast who just
happened to be doing the same thing I was. I lost 20,000 dollars, but I had some
fun with the crazy guy. I made up half my usual summer income in the last 2
months of the season and put all my investment into returning to this little
shit hole town in Baja, Mexico – La Ventana. I brought over $1,000 of fine art photo
canvases with me that didn’t sell. I made impossibly advantageous deals to the
businesses, windsurfers and kiteboarders for little to no return. It turned
into a twilight zone episode as too many people back peddled out of shoots and
promises to buy. Others smugly enjoyed seeing their pictures but acted like
paupers as they walked back to their paid for homes, cashing their government
checks.  Still others thought that I
should be paying them to take their picture or should gratefully fund their
careers in the kiteboarding industry, just because. 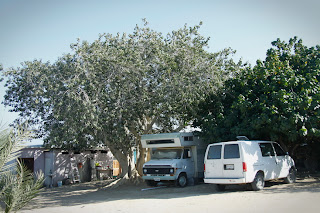 By early February, I realized, I was just living in squalor amongst
a largely strange and hostile community of hustlers on the business side,
boring retired people on the resident side and a steady influx of eco trendy
sport jocks on the transient side. I suppose I should mention that my residence
was a small postage stamp of slope under a fig tree in the back yard of the
founding family of La Ventana headed up by 90 year old, Don Ruben Leon, which
just happened to be beachfront. Think One
Hundred Years of Solitude. I had been sick most of January, recovered and
got sick again, got infected with the ringworm fungus from a mattress I was
sleeping on; One of my cats got feline acne and an ear infection; There was
mold under my tent; The camper was old; Bad plumbing, water issues, mosquitos… 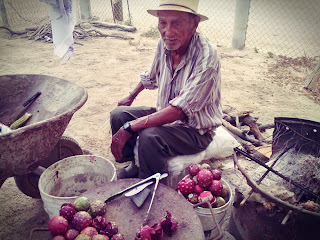 The whole time my van was running like shit. I had left it for
the summer with the mechanic who fixed it after the rip off.  I hoped to have a van back in good working
order. He said he didn’t drive it much, but I had countless reports of him
tearing up and down dirt roads and speeding. I knew it firsthand. He drove like
a possessed maniac. He picked me up at the airport in November and all was well
until the moment we drove into the town. The thing stalled right in front of the
tire shop of Filipe Leon. 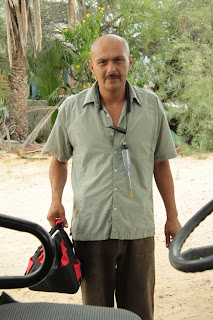 For about 3 months, the problem got worse and my friend the
mechanic, Jose, could never get the time to look at it, although he was using
it frequently to go to the city, La Paz, for his business. I finally ended that
relationship as I realized I was in no position to help this guy and I was
better off putting my faith in another mechanic. As it turned out the van kept
running the same way for 3 more moths. I even sold it like that. I figured out
these little fixes myself. When it suddenly stalled on the road, there was a
loose wire that needed jiggling under the hood. Fuel injector cleaner additive
came in handy as well. But all in all, it was like driving an out of control
vehicle in a bad dream that had become my reality. I was not able to use it for
anything but short jaunts and even then it was a hair raising experience. The
problem was in the wiring that had been tampered with a year before.

2 thoughts on “Raw Traveling is Officially Over”