Grumble, grumble, grumble, Olympics, grumble, grumble…. Oh I could shoot myself in the foot for voting for that stupid thing in the Plebiscite of 2003.. The good thing is, I am 4000 kilometers away in another country, BUT, that doesn’t stop me from hating the whole thing:  The corporate takeover of public space, the street closures, the fare increases, the surveillance implementation, the shit eating grins on the political front, the cost …

Ever since the bid came in, people have tried to optimistically reference some co relation to selling my products (aerial photos) with the event. What the heck am I supposed to do? Stand on the street corner and sell 4×6 prints? I doubt that would last longer than a coca cola commercial before I got hustled off to bylaw infraction enforcement purgatory.  For years my photo agent has asked for images of our fair west coast “for the Olympics”.  Finally, one related image sold last month for a grand total of 75.00 in my pocket.  What a payoff. 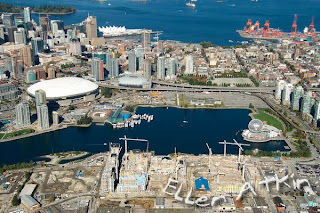 Chris Shaw is right, the Olympics is the biggest sports franchise in the world and they amount to the biggest hoodwinking of good will, altruistic intentions and public funds for private profit in our times today.  Are we not supposed to notice that every publicly funded service and/or refuge has had their budget slashed or removed indefinitely? How is it that government has no problem pulling billions out of a hat for a 2 week party but when it comes to public services, that our taxes are supposed to pay for, (including building bridges and roads), we are told there is no money left or we will need to pony up? Strange disconnect.
Let Vancouver be the first Olympic city that draws international attention to the outdated, overrated, overblown, corrupt, financial disaster masquerading as an athletic event with dignity, intelligence and poise from the activist community. Let the police express their disgust and distaste for averting their duties for this test practice in unprovoked heavy handed militancy upon innocent citizenry. Let Olympic committees self implode and cower in shame pledging to never again bring this blight upon humanity again.  Perhaps it will happen as Intrawest goes into receivership and government is prorogued.
Personally, I think it is great that the government is halted. The less government tries to govern, the better. Everything they do is wrong, so best not to have them trying. However, there is a darker presentment lurking in the shadows of this auspicious action by Stephen Harper; that the stage is being set for a major false flag terror event to provide a pretext for world government and population enslavement.
We see too many red flags right now in the most politically active city (Vancouver) within the best country in the world (Canada). We see the same security firm used in the London Underground during the 777 bombings providing “security” for Vancouver International Airport.  John Hammil warns us, “We strongly question the wisdom of allowing Verint Info Systems, a heavily discredited company with a terrible track record, and well documented ties to the CIA, Mossad, and MI6 to provide security for YVR during the Olympics.”
We see a conspicuously timed and unprecedented action taken by our federal government to suspend parliament until just after the Olympics. We see our laws in 2008 changed to allow foreign troops on our soil in the event of a “terror attack.” We see almost a billion dollars spent on “security” for “the games.” We see a documented timetable by the Council on Foreign Relations to build a North American community by 2010.   We see the only way they could adhere to that timetable would be via a “911” style co-intel pro operation. We see and we are watching.
We do not need a false flag terror attack at the 2010 Winter Olympics. There will be no trade off.  If some such thing happens we will know that it was not “Al Qaeda”. The real perps will not get away with it.  Right now, everybody knows that 911 was an inside job.  Everybody knows that almost every government on the planet is controlled by a psychopathic circle of elitist, hell bent on destroying humanity.  The jig is up. If there is any Canadian representative fool enough to go along with a false flag terror attack on Canadian soil, there will be no gain. That battle is lost. Better now to be a hero. New orders: STAND DOWN.
Consider becoming a Patron: https://www.patreon.com/bePatron?c=1374515
Consider donating: https://www.paypal.com/cgi-bin/webscr?cmd=_s-xclick&hosted_button_id=VN8YF92DQ2TBG

2 thoughts on “Olympic Stand Down”