Update June 2020
Achieved:
Medical records for my mother and father from the Allan Memorial institute in Montreal received in 2019.
Local and international support for my cause. Thank you.
Class action lawsuit filed, Jan.19, 2019 for the families of victims of Ewen Cameron at the Allan.
Goals: Underway
Planning:
Walk With Us Rally at the Allan Sept. 18, 2020 11 am to 2 pm
Destroyed Lives Documentary Film
Montreal Experiments Class Action Members (MECAM) campaign launched Feb. 2020
Update: October 24/ 2017: MK Ultra Girl Vs. MK Gawkers 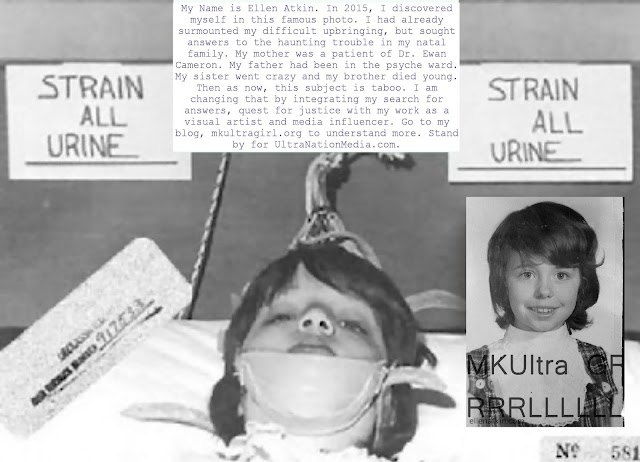 Firstly my mom shows up in a 2013 expose of mind control project (MK Ultra documentary film clip getting zapped by Dr. Ewan Cameron in Montreal) in a pretty dress she probably made herself. Now this. Over 1000
image references on google images, as of now. Lets see how my new inset with my grade 2 class picture gets used.  Am I the poster child for government sponsored trauma based mind
control on children? No question good looks might have had something to do with it. No one gambled that I might turn out to be a
photographer. And an expert in pixels. 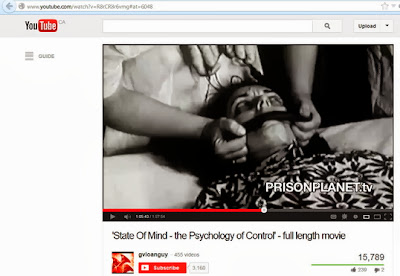 UPDATE: NOV. 29, 2016, found my mom in 2 more shoots. One as a still in 2009 movie called PUSH and another here as a portion of the same video in State of Mind: The Psycology of Control. A music video for an alt emo Canadian band gen x or near… https://youtu.be/sVlIxZ7vJ-k?t=2m28s

Original source FOUND! Here, Mental Hospital made by state of Oklahoma in ’53, the year it happened to my MOM.

Fritz Springmeier and Cisco Wheeler estimate there are about 2 million of us, or rather, were.. A lot of us are dead. My mother is dead. She lived a miserable debilitating life of being addicted to anti depressants and tranqs. She couldn’t talk about her ordeal. She could cry though.. Cry through eyes of fear and longing, but not much explanation.. She didn’t even put her name to the class action law suit that got people in the “sleep therapy” program $100,000 each in the 80’s. That would have gone a long way to alleviating the poverty she went through. Why did her family not help her? I have no idea.. They loved to scapegoat her though. She always stood out among her whole family. Not a very good omen for life if your only faults were being talented and beautiful.

As though growing up with that wasn’t bad enough, now, I can safely assume that she was probably threatened with her life or the life of her children if she talked about any of this. Why else would she be so afraid of getting that money? I am guessing my Dad jumped on this children for government torture programs bandwagon for nothing more than the prestige it might have offered him. He was ridiculously obsessed with being important, special or “a somebody”. To him, these people where priests or politicians. He loved Marshall McLuhan as well.

So, here is my little reconstruction of what may be the truth of my early life. My mother gets wrongly recommended to the Allen Memorial Institute in Montreal to treat mild depression in 1953 (brought on by the breakup with her fiance?). She completes the 3 month program according to her own sister and does various jobs in London, Montreal and Windsor ON afterwards. She meets my father in 1959 and three months later they are married in St. Jean sur Richelieu. He is at his first teaching job at the military college there.

My father has mental health issues surfacing about 16 years old. He goes to St. Peter’s Seminary in London, Ontario but is soon at the hospital psyche ward- the diagnosis? “nervous breakdown”. He never went back to the seminary but remained obsessed with priests and would visit them until his death. Apparently he was at a few psyche wards in his early life but my mom usually took the spotlight away from him on that subject. So very little was spoken about my father’s crises. My mother had no good feelings, thoughts or outcomes regarding any of the treatment she went through. But my father’s treatments were just not discussed at all. He was also at St. Thomas mental hospital for sure as well. This is one of the mkultra identified hospitals.

So, my nutsy, aggressive, intellectual screw ball of a dad might have been assigned as her handler. This often happened to some of these people. They married their handlers. The kids come along and before you know it, me and my sister are part of the program. My mother, I am guessing, objects to it by trying to commit suicide right about the time of this grade 2 picture. I was really not happy in that shot and to me, it is obvious that I am stressed out and faking being a good kid. I was embarrassed and still am over that picture of me. My mother was apparently at the Clark institute of Psychiatry in Toronto at this time. This is where she probably got double dosed and given the shut up or your children will die talk. She did come back but she was not the same person. She was more drugged and defeated.

I am not sure about this picture at all. I can’t remember it, but there sure are enough clues that would suggest this might have happened to me. When? I was probably about 6 years old. 1969 or 70. Those insets on the image may or may not be true. If it happened to me during a spell (5 months?) in grade 2 or 3, it may have because, I, like most people hardly remember those times.

I am actually pretty dead sure it is me. I can recognize the astigmatism, I have in my eye since birth.  Now what? Where did this picture and all the others come from? Why are there at least 3 superimposed photo insets on the image? Someone tampered with it for sure. Strain all Urine? WTF is that about?

But, I would like a few more solid facts, some more references. Any thing from anybody.. Research please… feel free to contact me through ellenatkin@gmail.com or call 778 552 1299.

June 2020 p.s.
This blog is written as a diary style commentary. It is, in itself, evidence and proof of my lifelong struggle with MK ultra and it’s effects on my life. One must read the whole thing to gain perspective into the mountains that I have moved since launching this campaign. No one is more offended than me. My offence tops all others. Do NOT apply Kultra Causes de jour to my case.

Nadyugemos's Pastebin - Pastebin.com
Pastebin.com is the number one paste tool since 2002. Pastebin is a website where you can store text online for a set period of time.
pastebin.com
1 1    View on Facebook
Follow @@mkultragirl

"we can avoid having to do much more terrible things... " Freeland https://t.co/8KR0EGIETH
View on Twitter
Greg @somecanuckguy
I wonder what terrible things @cafreeland is indicating that the #Liberal Government will do to Canadians if we don't continue following the rules? Think most have been doing their part.

Did you catch her Freudian Slip?

"That's what the data shows...other studies seem to indicate about the same thing, about 10% of Americans have been exposed," he says https://t.co/fopYlI5jzg
2
3