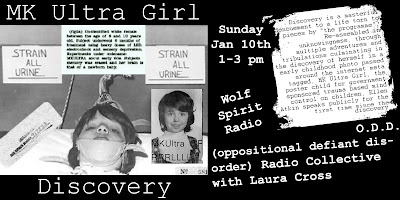 Ellen Atkin discovers her child self in an image that has been used over 1000 times on the web as the poster child for government sponsored trauma based mind control on children.

Here Ellen Atkin Ultra (MK is over, all TI’s are now free to do the same.. drop the MK pick up the ultra.) reveals techniques to remove mind control and identify the difference between the programme and your true self.

She shares the experience of integration with the conscious mind of a world that was never acknowledged, even to herself. Yet the evidence is everywhere witnessed by the severity of circumstances that befell her family and her.

Ellen Atkin Ultra speaks truth to power directing her fire hose at the very real programme and the surprise gift that the picture brought to her life., allowing some integration at the right time and place for a very new, very real and very powerful message to get out.

Nobody wants to talk about the targeted individuals. Nobody realized they existed because they are trapped in a time hole that nobody can see, but we can all feel. Only the inter-dimensional warriors and cosmic cousins can see them. Holy Spirit calls them bats, Ultra girl calls them buggers. The buggers use the trapped pieces of your soul to feed off of. There are estimated in the 1,000,000’s of such trapped souls, incarnate and discarnate, who are nothing but the programme and a terrified screaming spark of creation.

This is a call to action for all survivor/ thrivers. Now is the time to go active.  Find stillness, connect your conscious mind then take the truth to power fire hose and aim it right at the buggers. Let it blast. Give them back what they gave. If you are really good you can do worse, that is the fun part.

Do this, free the trapped sparks, align your own golden compasses and realize that without all the crazy targets we would not be breaking through this matrix. Lets face it, targets are cut from a different cloth. Only the conscious TI can truly understand that. So now we are the bell ringers and harbingers of truth who will wind up being the most effective beings, the only ones with the skill really, to reverse engineer this matrix prison planet.

What does that mean? It means that the great heroes of our liberation from the dying archon buggers are the TI’s. Nobody saw that coming. Do the work, get the job done and everyone will finally get paid for all the lifted content using our soul currency that has fed popular culture without CREDIT or payment! We are the real stars of this show.. Time to shine. Time for all TI’s to go Ultra.

Ellen Atkin Ultra kicks the hornet’s nest under the Canadian Establishment aiming her truth to power fire hose at Marshall McCluhan, Cardinal Carter, The Trudeaus, Steven Harper, A list Hollywood and other institutions. You don’t want to miss this.

A very clear picture has emerged of the world  we were meant to be living in. Are you going to stay disassociated for the whole ride? Take any moment of now and aim your truth to power fire hose back at the perps. Then aim it straight up to the cosmos. Don’t forget that part. Blast it through the dimension, but this time with gold dust and a few silver flecks.

These messages will be coming more frequently as we work through the seven pillars that natural humans must align with in harmony to the universe or perish.

In another twist of divine providence Ultra Girl friended the Holy Spirit and she will now start transmitting those messages as well.

Holy Spirit: “Those bats are open. I told them to go back to the ones that use us to hide behind. At least more people are talking of them. “