In
October 2015, I , Ellen Atkin, discovered this image on the internet.
It has been well used since 2007 on the net. My mother was
electroshocked by Ewan Cameron in Montreal in the ’50’s. A video of her
being shocked is part of Infowars produced movie, State of Mind: The
Psychology of Control (2013). A still from that vid is part of the movie
Push as well. (2009). My sister is clinically insane. She was a violent
schizophrenic, My brother drowned in ’85. My father was also inducted
into the Ontario mental health system in his early teens and had a
strange affiliation with many catholic priests. Nobody in my family has
every received any compensation for the torture and abuse we received
thru the governments, health care systems and the mk ultra program.
I just discovered this clip with the first ever explanation as to where this came from… This woman on the hospital bed getting electroshocked is my mother, Emma Jane Crunican, from London, Ontario. She married John Atkin from Windsor, Ontario in 1959 in Montreal.

Quote from the maker of this clip:

Uploaded on 12 Apr 2007
Video I made for Habitual Inmate by The Bastard Fairies.
I used Public Domain footage from a surreal film called ‘Mental Health’ made by the Oklahoma State Department of Health in 1953. 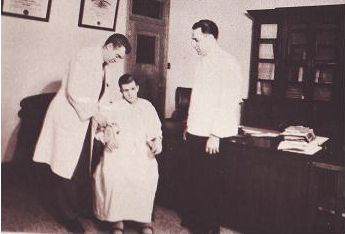 I think this image here could be my dad… He went skitzo when he was 16, joined the seminary, was hospitalized 2 weeks later because of a “nervous breakdown”… Then he went to university (western) and managed to get his MA and become a high school English teacher.

That dude on the left is Joseph Mengele. When I do a reverse image search on mkultra girl, that original photo without all the insets I added, the search bar does an auto fill with the phrase: josef mengele experiments list.

Nobody on either side of the family will say shit if their mouths were full of it. Some distant relatives have been helpful but only with a few anecdotes.

1 thought on “MK Ultra Families – the Atkins and the Crunicans”

Ellen discovered herself as the poster child for trauma based mind control on children in 2015.

In 2013, she discovered her mother in a film clip dated 1953 receiving electroshock by Dr. Ewen Cameron & 6 nurses.

Then she found another film clip of her mother as a patient of Dr. Ewen Cameron from 1958.

Concurrently, an image surfaced of a Joseph Mengele (Dr. Green) ringer with a young patient who is likely her father, (coinciding with his first "nervous breakdown") from a 1949 Quebec mental hospital year book.

These startling events can never be undone.

Years of persistence initiated by seeking justice, led to getting some of her mother’s and father’s hospital records in 2019 from the Allan Memorial Institute.

Now she represents her shattered family and supports other families in the many lawsuits underway seeking justice for lives destroyed by The Montreal Experiments.

Dr. Ewen Cameron clip Electroshock 1953
This appeared in a University Of Oklahoma promo vid for their mental health industry. This was the year that Louis Jolyon "Jolly" West was appointed professo...
youtube.com
2    View on Facebook
Follow @@mkultragirl