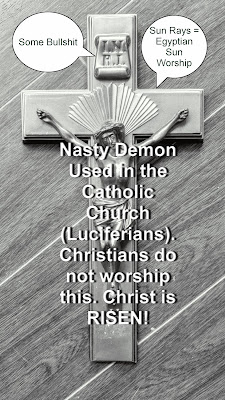 Smashing idols has proved a lot of fun for me. Let me tell you what happened as I went into the thrift store to pick up some inspirational Jesus stuff to decorate my home with. I have been removing anything that might be construed as satanic portals and thought i would made some additions. Well! Be Careful!… so there I am walking into the store and I am attacked by a demon right off.

He is inside of a schizophrenic man who no doubt has had his troubles with drugs and lord knows what else. This lurker starts circling me and eyeballing me in the usual dark vacuum like energy that is easily identifiable as dark power. there is power to it, which is why people often get mesmerized. But it is only the kind of power that leads you to the open pit of hell. 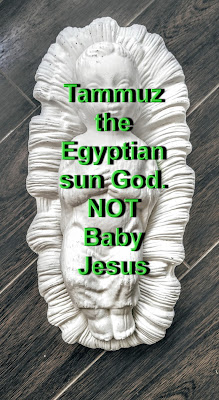 So he starts pointing at me and saying, Cancel, Cancel, Delete, Delete… I had actually forgotten that until a few days later. In my awareness, I said something like, in the name of Jesus Christ, you are possessed by a demon. He foolishly stopped, stuck his nose in the air and said, “I am an angle of light”. Well we all know that Lucifer is the real angel of light also known as the light bearer.

So this dude circles the counter with his eye on me the whole time. The clerk tells me he is schitzo and I tell her yeh, I know, my sister was schitzo and most of my family. I know exactly what I am talking about, he is possessed by a demon. Been there done that. She starts to come around and said, you know I think yo uare right, his eyes were completely black. no difference between the pupil and the iris. I saw that too, but there are people who have very dark eyes, like my Uncle Paul, otherwise known as Father Paul Crunican. He had eye colour as close to black as you can get. Hmmmmmm… No word on his history other than he was the pride of his natal family and everybody loved him. I refused to call him Father Paul, since I was an aethiest. He was a nice man as far as I remember.

Then, I ask the clerk for a bidding number because I want to bid on an item in the display case. The demon possessed man is approaching me from his loop and says immediately, “221”. I look this number up in the satanic meaning of things on line and it means… God has forsaken thee.  GREAT!

Well, someone here has not cancelled or deleted the information. In fact, I am sharing it for all to know of such things.

So the guy leaves the store because there are too many eyes on him and I start shopping. I pick up a bunch of items that I think might be good for reminders of faith and bring them home…

Turns out a few of them are Lucifer’s tricky false idols masquerading as Christian things. I kinda had the feeling so I posted pics of these demons on my FB and got quick answers about there origin.

Then, I got rid of them for ever and sent their sorry demon asses back to hell. In the name of Jesus Christ. The real one.

Please note that this work is not for everyone. You have to know how to deal with demons. You can’t just do this work willy nilly. If you do not double down on your prayers and acceptance as Jesus as your saviour inside, for real and keep it up all the time (remember there are no 2 alike moments in time ever), then you should not be doing this work. You could become possessed x7 times as it says in the Bible. Most people I know get scared and start believing some nonsense about the higher self and aliens are going to save us, than get enough bravado actually face a demon.

Time and time again, I have heard and I have seen the power of defying demons. It only works in the name of Jesus Christ. hey don’t just believe me. Do the research. Linda Maxwell, knows all to well and has done great exposure of the false demonology of the spiritualists in England like Blavatsky and Bailey and all those fat asses. This stuff happens more often than you realize. That is why we don’t substitute Jesus Christ’s name for Sanada, Jaweh, or any of that stuff. The power comes in the words, Jesus Christ.

I don’t think I was really convincing anyone here that I am a born again Christian. This would be at least my second failed attempt a being one.

Essentially, my attitude within the born again AND fundamentalist ranks is this. I have as much right to divine connection as you do.; Divine expression, passionate preaching, claiming a place in heaven, la de da…. included. And express, I will.

Being the role of priest as devined through Sheppard Hoodwin, a gay, so-cal channel of a causal plane entity named, Micheal, I get why I need to always seek out higher understanding and transmit it for the benefit of humanity.

However, it is very hard to adopt the born again christian take when you yourself adopted atheism as a child of 5 years old, which is what I did. I was vocally and inwardly aesthetic. Looking back, I see that was my reaction to the hypocrisy I evidenced in my father and his odd attachment to the Catholic Church even though he never prayed or did anything that wasn’t full of mockery and jest in his adherence to his so called faith.

Now, I get it, there is a supreme being or maybe supreme force. I had to admit that to myself at 15 yr old. But still, how does anyone sift through the denominations, sub-sects, beliefs, biblical interpretations ect., without a certain amount of suspension of disbelief? That nagging, niggling need to know drew me to the writings of Dr. Scott Mcquate. I was also tipped off due to the manner in which I found him. He was one of the first people to comment on mk ultra girl, truth to power hour facebook page. That was no co incidence. I let his urging to read his material slide until I heard him on an interview with Micheal Vera on Late Night in the Midlands Radio. Then it all clicked.

Finally I bought one of his books, the Tribulation. That snowballed and I am now satisfied that his work is exactly what he says it is. The true meaning of the bible; The code (lies, twisted meaning) deciphered. Thank you Dr. McQuate. I highly recommend his books for anyone and everyone who dares to presume understanding of cosmological & metaphysical truths; That includes new agers, channels, any and all sorts of religious adherents, all spiritualists and every atheist.

As one who loves to preach, inspire, uplift and help, I really needed this info. I hate feeling like I am groping in the dark.

Ellen discovered herself as the poster child for trauma based mind control on children in 2015.

In 2013, she discovered her mother in a film clip dated 1953 receiving electroshock by Dr. Ewen Cameron & 6 nurses.

Then she found another film clip of her mother as a patient of Dr. Ewen Cameron from 1958.

Concurrently, an image surfaced of a Joseph Mengele (Dr. Green) ringer with a young patient who is likely her father, (coinciding with his first "nervous breakdown") from a 1949 Quebec mental hospital year book.

These startling events can never be undone.

Years of persistence initiated by seeking justice, led to getting some of her mother’s and father’s hospital records in 2019 from the Allan Memorial Institute.

Now she represents her shattered family and supports other families in the many lawsuits underway seeking justice for lives destroyed by The Montreal Experiments.

Dr. Ewen Cameron clip Electroshock 1953
This appeared in a University Of Oklahoma promo vid for their mental health industry. This was the year that Louis Jolyon "Jolly" West was appointed professo...
youtube.com
2    View on Facebook
Follow @@mkultragirl