Since shooting aerials full time since 2007, I have come to recognize that I am in business because people love to look at the progress (or decline) of the landscape over time. Besides my prodigious farm clients who understand this visual intelligence better than anyone, I have had the good fortune to be in involved in a few projects over the years of some interesting Before and Afters.
Pemberton Valley Dyking District 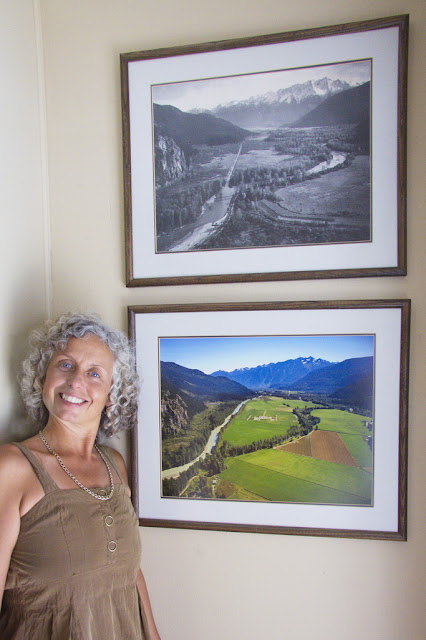 My last aerial shoot in Pemberton, in 2008, got me involved in this project with PVDD.
The earlier Black and White was shot in the 50’s before the dyke was built to divert the river across the valley floor.
The 2 images are displayed in the front hall right beside where everyone comes in to pay their bill.
Besides the historical significance, the two images actually show what the dyking district actually does.
White Rock/ Ocean Park 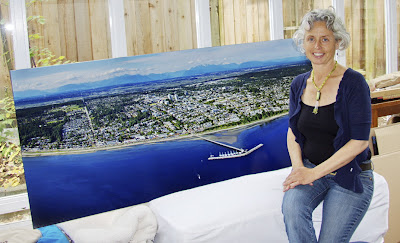 In 2011 I did a series of aerial panoramas of White Rock for Realtor Gary McGratten. His interest is in large format displays. He has this image in his office. It is about 30 inches by 65 inches and printed on metallic paper. The idea is that he can point to the property that people are buying. One of his clients has bought and sold with him 13 times, all within White Rock.

Earlier this year, Gary called me with a series of aerial panels from the National Air Photo Library in Ottawa of the White Rock and Ocean Park area. We worked on these for 5 months to get them presentable. This image above was taken in the 1930’s.

I recently did the after shot in August of 2012. I haven’t had time to fully pull it together but this shot is a sample of how the area looks now. These aerial panoramas are a lot of work. I mean a lot of work.
Capricorn Creek Landslide of 2010 near Pemberton, BC 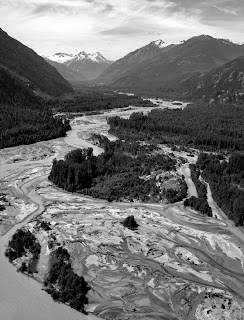 I did 2 aerial shoots in Pemberton in 2008. One of them had us flying all the way up Salmon Slough toward Meager Mtn. The only reason I took this shot was for the beauty that it cried out. I had no idea that 2 years later it would be the location of the landslide that changed that area forever. Because Pemberton was the place I got my start in aerial photography in 1997, I donated this image to the Pemberton Rec Centre, in honor of Bruce McFadden, a village councilor who helped get me started in my now successful career. The After shot has yet to be taken but with the help of the good people of Pemberton we will get it done this year. The final installation will be in the main corridor of the Pemberton Recreation Centre.
Contact Ellen Atkin at 778 552 1299 or ellen@ellenatkin.com to be involved in this project.
Consider becoming a Patron: https://www.patreon.com/bePatron?c=1374515
Consider donating: https://www.paypal.com/cgi-bin/webscr?cmd=_s-xclick&hosted_button_id=VN8YF92DQ2TBG

1 thought on “Before & After Aerials – Why Are They So Cool?”

MK Ultra Girl
Today is the day. We are uniting the members. We are seeing justice in the lifetimes of the living survivors. We are telling the media and we are making a movie. Walk with us today. Both law firms will represent and mainstream news will be there. Walk with us 11am Allan Memorial. Montreal.

Montreal Experiments Class Action Members
Today is the day. We are uniting the members. We are seeing justice in the lifetimes of the living survivors. We are telling the media and we are making a movie. Walk with us today. Both law firms will represent and mainstream news will be there. Walk with us 11am Allan Memorial. Montreal.
View on Facebook
Follow @@mkultragirl

Today is the day. Justice apology compensation. Mkultra mind control is torture. Walk with us. God is with us.
View on Twitter
0
3